Murals of the Catholic Chaplain's Office

Warden Michael Cassidy built these impressive spaces for his offices in the 1880s. Later wardens moved their offices back to the Administration Building. This space became the offices of the prison’s religious staff: the Protestant, Jewish, and Catholic chaplains. 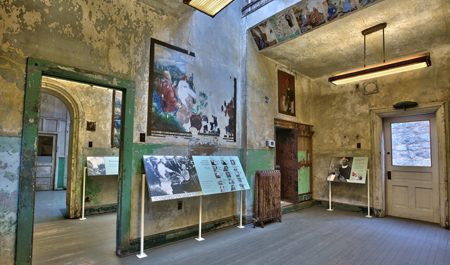 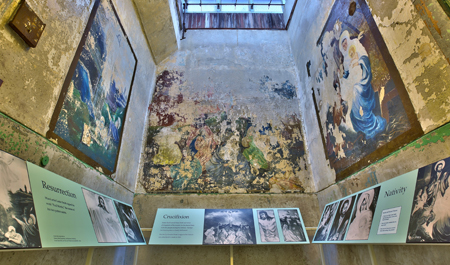 Lester Smith painted 23 murals on these walls in 1955, while incarcerated at Eastern State, and used the signature “Paul Martin” to honor his two favorite saints. Smith was a self-taught artist who had converted to Catholicism in prison. When Father Edwin Gallagher, the penitentiary’s Catholic Chaplain (1952-1958), witnessed Smith painting in his cell, he invited him to decorate the offices where he met with and counseled prisoners.

These remarkable and extremely fragile paintings vividly set the Catholic chaplain’s rooms apart from the rooms used by the other chaplains. Most striking and personal is the mural of the kneeling prisoner seeking absolution through his confession. These murals remain a testament to the story of one person who underwent a powerful change while in prison.

The murals suffered extensive damage during Eastern State’s period of abandonment. They were conserved in 2014.

On view during all tour hours as part of our Hands-On History program, included with admission.