Everyone has a story. The stories we tell others and the stories told about us make a lasting impact. Rob Rosa, an Eastern State Board member since 2015, believes that if his story can touch even one person, then it is worth sharing.

Norberto (Rob) Rosa will tell you that animals have always been an important part of his life. As a child growing up in Philadelphia, Rob used to rescue animals from the streets, hiding them in his bedroom until he could find them permanent homes. He even imagined growing up and becoming a veterinarian. Others envisioned a different path for him.

When he was 16, and again when he was 18, Rob was labelled a “career criminal” and told by several judges that he could never be rehabilitated. For a time, after being sentenced to twelve years at SCI Graterford, Rob internalized these words, and they started to shape his narrative. In 2002, however, he made a decision that would change the rest of his life.

Rob faced a critical choice. He could stay where he was and enroll in college classes or transfer to the outside unit at Graterford where he would have the chance to gain valuable skills and work with animals again. “I knew then if I stayed in those prison walls I would relapse,” Rob says. So he made a last minute, life changing decision to transfer to the outside unit.

In addition to caring for 38 cows and horses, Rob volunteered for Canine Partners for Life, where he learned how to train service dogs. He was a natural and formed a special bond with one of his first dogs, a black Lab and Pitbull mix. After a particularly harrowing day, Rob was frustrated with the dog for trying to run away and almost causing him major trouble. His four-legged friend did what dogs do best, noticed Rob was upset and put his head in Rob’s lap. Rob’s frustration melted away. “I thought then, ‘this is what I want to do for the rest of my life,’” Rob says. 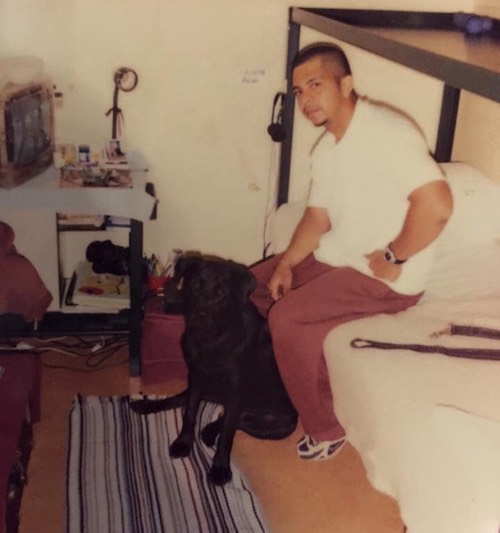 And he did. Rob was paroled in 2005 and was soon after hired by Canine Partners for Life as Assistant to the Executive Director. Now, after holding leadership roles in various shelters and rescue organizations, Rob is the Assistant Vice President of Operations at New Leash on Life USA, a non-profit, prison-dog training program, dedicated to “Restoring Lives, Reducing Recidivism, and Rescuing Dogs.” New Leash pairs at-risk shelter dogs with people experiencing incarceration who are taught to socialize and train the dogs, increasing their adoptability. Participants also have the opportunity to learn valuable animal handling skills as well as attend workshops on life skills and career readiness to ease re-entry.

This is how Rob eventually found himself visiting Eastern State Penitentiary for the first time. In 2013, Eastern State was looking for new ways to tell the story of the American criminal justice system – past and present. Lauren Zalut, now Director of Education and Tour Programs, reached out to New Leash on Life USA and invited them to be a part of a new program – Family Weekend: Pets in Prison. During the program, Rob shared his story and talked about his work with New Leash’s pre-release and post-release programming. Five years later, New Leash on Life USA and Eastern State still partner each Family Weekend, with this year’s event set for November 10 through 11. 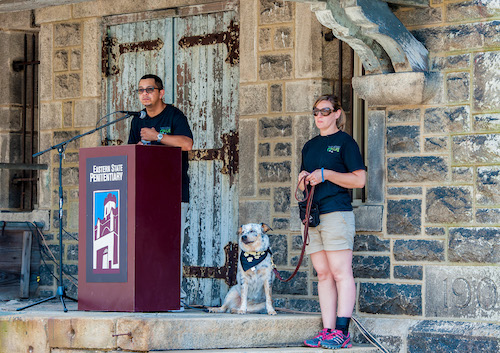 The first time Rob stepped through Eastern State’s massive front gate, he immediately felt confronted by the stories of thousands of people who had come before him. Looking down the cellblocks, he could envision everything that took place within them when Eastern State was an active facility. It made a lasting impression and, ultimately, led to further partnership between Rob and Eastern State in the years that followed.

In addition to his contributions to Family Weekend programming, Rob served as an advisor on Eastern State’s exhibits The Big Graph and Prisons Today: Questions in the Age of Mass Incarceration as well as the Returning Citizens Tour Guide Program. It was through these collaborations that Eastern State’s leadership decided to appoint Rob to the Board of Directors in December 2015.

Rob serves on the Board, in part, because he appreciates Eastern State’s willingness to foster dialogue about modern-day criminal justice. He sees the historic site as the “perfect platform” to host these kinds of conversations. After all, individual stories are important and powerful, but they are nothing if not considered within the larger framework of society. Discussing contemporary incarceration within the walls of America’s most historic prison, giving voice to individual stories inside the confines of a structure that once housed thousands – this resonated deeply with him.

Context is important. Stories are important, and so are opportunities to rewrite them and pave a new way forward. Rob’s work speaks for itself. “No person or animal should be forever judged by their worst moment,” he says, “everyone deserves a second chance.” Rob’s path led him to a role at New Leash on Life USA and eventually his work with Eastern State where he continues to advocate for others – animals and people alike – who are writing their next chapters.