Pandemics and Prison Policies: 1918 and Now

Please Note: The statistics shared here were accurate as of April 7, 2020. COVID-19 is a rapidly progressing virus, so infection rates may have changed by the time you are reading this article.

In the fall of 1918, as a global influenza pandemic was ravaging Philadelphia, Eastern State Penitentiary closed its doors and implemented a full quarantine for the incarcerated population. As the virus claimed the lives of about 12,000 Philadelphians in a matter of weeks, the prison population remained remarkably healthy. Social distancing and strict isolation worked.

In the nation’s prison and jail systems today, the coronavirus pandemic is spreading rapidly, raising alarms that the nation’s 2.2 million incarcerated people are an especially vulnerable population. People in prisons and jails occupy shared cells and use communal bathrooms. With an inability to practice social distancing, correctional facilities are becoming increasingly tense environments. Reporters have documented the emergence of contraband economies around limited soap supplies, fights over phone time in facilities with visitor bans, and commissary workers logging long hours as their incarcerated peers stock up on supplies before facilities go into lockdown.

How can prison officials mitigate the spread of COVID-19? As we seek answers to this complex question, we can look at the ways in which Eastern State Penitentiary handled a highly infectious flu strain 100 years ago.

Originating abroad, the flu spread quickly in the U.S. among soldiers returning home from the WWI front. In mid-September 1918, it arrived at the Philadelphia Navy Yard and sickened 600 sailors. On the day the first case of the flu virus appeared at Eastern State—September 30, 1918—Warden Robert McKenty closed the penitentiary to outsiders. He wrote: “On account of the epidemic of influenza, I stopped all visits both to prisoners and for purpose of visiting the institution.”

The prison continued functioning as a correctional institution. It received and discharged people throughout the pandemic, but officials barred all assemblies and meetings. Church services were halted. Warden McKenty encouraged prisoners to get “plenty of sleep, plenty of fresh air, [and] plenty of exercise,” according to The Umpire, Eastern State’s prisoner-produced newsletter.

All told, 63 incarcerated individuals contracted the virus that fall. All cases were isolated in the prison hospital. Prison officials scrubbed the cells that sick patients vacated with formaldehyde. Staff fell sick as well. Forty-two officers called out sick in October—most for a few days, but at least two for the entire month. Christopher Hines, a 33-year-old guard, died of influenza-induced pneumonia on October 11.

Eastern State saw its first flu-related prisoner casualty the next day. Joseph Deal, a 23-year-old painter from Luzerne County, died on October 12. A week later, a second prisoner, 22-year-old Stewart Clugston, died of the flu. A week after that, a third prisoner succumbed to the virus: Andrew Conway, a 38-year-old originally from Maryland. Deal, Clugston, and Conway were the only three people—out of a total incarcerated population of around 1,350—who died of the flu that fall at Eastern State.

After a “thoro house-cleaning, disinfecting, etc. had been effected,” according to The Umpire, the warden lifted the quarantine on Sunday, November 10, 1918, following a 43-day lockdown. Catholic mass was said in the prison chapel. A group gathered for a service of songs in the prison’s center surveillance hub. Eastern State’s incarcerated population praised the administration and even conferred an honorary status of Surgeon General to the prison’s resident physician, Dr. H. W. Hassell. 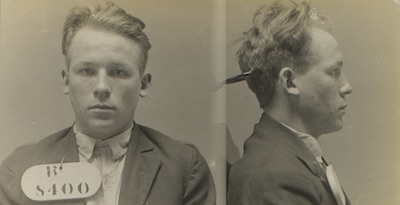 How does Eastern State Penitentiary’s response to the 1918 flu pandemic compare to the impact of COVID-19 in prisons today?

Eastern State Penitentiary’s intensive 6-week quarantine worked. People still arrived at and departed from the prison, but there was limited contact among the prisoner population, and no outside visitors, other than staff reporting for duty. The penitentiary’s lockdown mirrored the city of Philadelphia’s lockdown, though the prison’s lasted a few days longer.

About 4.6% of Eastern State’s incarcerated population contracted the flu during the 1918 pandemic. (The penitentiary’s influenza death rate during the fall of 1918—0.2%—was lower than the city of Philadelphia’s flu death rate at the same time, which was around 0.75%.) While the coronavirus infection rate in Philadelphia’s jails remains low to date—it currently hovers around 0.8%—jails throughout the country are seeing their rates spike. In New York City’s jails, including the Rikers Island jail complex, about 3.9% of the incarcerated population has tested positive for coronavirus, much higher than the infection rate for the city, which is around 0.5%. The Rikers Island chief physician, Ross MacDonald, has called the pandemic a “public health disaster unfolding before our eyes.”

District attorneys, judges, governors, and advocates are pressing for prisons and jails to discharge as many individuals as possible to curb the spread of the virus. In recent days, states such as California and New York have granted early release to nearly 5,000 people serving time for non-violent crimes and parole violations.

In Pennsylvania, the state prison system has barred all visitors, distributed free masks and soap to all staff and prisoners, and implemented enhanced screening procedures for everyone entering its facilities, checking for fevers and other virus symptoms. Communal spaces such as gyms, barber shops and libraries are closed. Certain facilities that house immunocompromised individuals (including the elderly and those receiving oncology treatments) are not accepting any new prisoners.

These strict quarantine measures mirror the austere steps Eastern State Penitentiary implemented 100 years ago. While we hope that our friends and family members living and working in prisons and jails come through this epidemic unscathed, questions remain. What will the justice system look like after this crisis passes? America will still have the highest rate of incarceration in the world, even with all of the release efforts currently underway. In our tours and exhibits, we ask our visitors to engage with us in dialogue around the past, present, and future of American criminal justice. Now, more than ever, is a great time to ask: how would you like to see the U.S. prison system change?