A Fresh Take on Al Capone

"The whole room was suffused in the glow of a desk lamp which stood on a polished desk.... On the once-grim walls of the penal chamber hung tasteful paintings, and the strains of a waltz were being emitted by a powerful cabinet radio receiver of handsome design and fine finish..."

Scan this passage too quickly and it might seem to be describing a room at an upscale hotel or perhaps the den or study of a well-to-do white-collar businessman. Take a closer look and you’ll notice several words that make it a bit more intriguing. You may have guessed it by now, but the “penal chamber” described here by a 1929 article in the Philadelphia Public Ledger was home to none other than the infamous gangster Al Capone.

It’s worth nothing that this plush décor may not necessarily have been unique to Al Capone’s Cell. In fact, a New York Tribune article from 1903 about Eastern State details one prisoner’s cell as “more clean and more ornate, with its rocking chairs and pictures, its old fashioned ‘mottoes’ and ‘tidies,’ than is the average sitting room.” The photo below was published with the caption, “THIS IS NOT A NEAT GIRL’S HALL BEDROOM. It is a prison cell occupied by a convicted burglar.” Still, while Capone’s treatment at Eastern State may not have been all that special, his larger-than-life personality and infamous celebrity ensured stories of his time at Eastern State were, and still are, wrapped in a layer of intrigue. 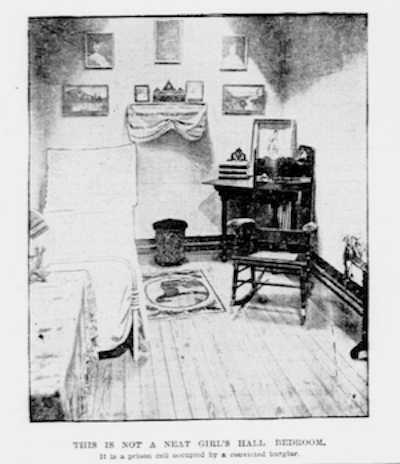 Al “Scarface” Capone was arrested outside a Philadelphia movie theater in May 1929 for carrying a concealed, unlicensed .38 caliber revolver and handed a one-year sentence. He served eight months of that sentence here at Eastern State in a seemingly opulent cell with many of the creature comforts he had come to expect.

These elegant flourishes – artwork, a radio, a desk, and more – are part of the exhibit visitors see when they make their way to Eastern State to catch a glimpse of the cell where “Scarface” spent his first stint in prison. While the objects are all period appropriate, the cell itself remains unrestored, a jarring juxtaposition of peeling paint, deteriorating plaster, and fine furniture – until now. Al Capone’s Cell is getting a fresh, new look.

In December 2018 and January 2019, Eastern State will coordinate a replastering project, which will restore the walls and ceiling in Al Capone’s Cell. All furniture will also be removed from the cell and preserved through cleaning and minor conservation treatments. Following these projects, for the first time in the site’s history, the furniture and the cell itself will provide visitors a cohesive glimpse at how Al Capone’s Cell likely appeared in 1929 when he was incarcerated here. 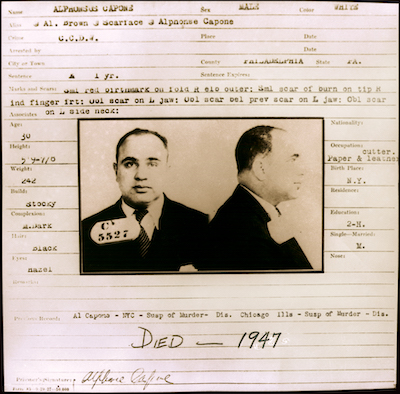 At Eastern State, projects like this one are exciting, but challenging since we are also committed to preservation of the historic site in another way – as a “stabilized ruin.” This means we aim to ensure that the building is maintained in the condition that it was found, while preserving it from further decay.

To preserve the found condition of Al Capone’s Cell, conservators will remove loose sections of plaster and stabilize painted finishes. Over this, they will install wire mesh. Gypsum cement will be applied to the mesh, not the original walls, to mimic the appearance of the original plaster. The end result? An exhibit that resembles the cell as it might have looked in 1929 with the original walls safely preserved below, behind a layer of removable mesh.

As I’m sure Al Capone would have agreed, appearances can be deceiving. And we can bet that Capone had his fair share of secrets stewing underneath the surface. Soon, by February 2019, his cell at Eastern State will mirror the man himself – complex and layered, with a taste for the finer things in life.