Penmanship and Puzzles: Transcribing Our Archives

Like many people, my plans changed pretty drastically due to COVID-19. In March, I was entering my final semester as a graduate public history student at Villanova University. I planned on finishing my program with an internship this summer. I was also working in visitor services here at Eastern State. Thankfully, as Eastern State transitioned employees to online roles, I was given an opportunity that was beneficial both to my studies and to Eastern State: transcribing archival documents.

Interestingly enough, transcription has felt a lot like another activity that’s become synonymous with these times of self-quarantine – puzzles. The chance to transcribe Eastern State’s old documents has been very exciting for me but isn’t always easy. The first thing I came to both appreciate and despise is penmanship. Thank you, Caleb J. Milne (1891), not so much to you Andrew Miller (1854).

Transcribing is full of surprises. I was surprised by how quickly I was able to adapt and learn how to read different people’s handwriting. Documents that at first had many illegible words soon became easier to read as I continued to work on them.

Truly, though, the most surprising, and fulfilling part of transcribing has been learning just how vivid and complicated Eastern State’s history has been. I’ve enjoyed working with my colleagues to piece together some puzzles of the penitentiary’s past. This is well illustrated in the exit of the prison’s first warden, Samuel R. Wood.

Archival documents note that when Warden Wood prepared to leave his position, he owed the prison’s Board of Inspectors $10,230.56. In 1839, Wood transferred 60,000 yards of woolen linsey, a type of fabric, to a member of the board to settle his debt. While this was initially accepted as full payment, the Board discovered the demand for the material had fallen. After selling the fabric, the amount due remained over $5,000. Wood made additional payments that further dropped his balance, but he ultimately left the institution in 1840 still owing $3,460.70.

In 1841, the Board of Inspectors spent a lot of time discussing how to proceed with the outstanding debt. According to the 1841 minutes, Board member General Robert Patterson protested against a settlement. Patterson argued that he had “doubts as to the right of the Board of Inspectors to exonerate a defaulting officer by receiving worthless obligation.” The urgency to act on Wood’s debt increased when President of the Board, Richard Vaux, discovered Warden Wood filed for bankruptcy via the newspaper. Vaux called a special meeting to discuss these new developments.

Wondering how this story ends? I was, too. The 1841 minutes I transcribed end without a resolution. I didn’t discover what happened until a colleague of mine, who was transcribing the 1867 Board of Inspectors minutes, casually mentioned Wood had died several years earlier, and the debt could not be recovered.

Cliffhangers like this are a pretty common experience in the transcribing process. Topics from previous years are brought up without explanation like an inside joke you may never get. Events such as prisoner escapes or deaths are mentioned briefly with no details. Speaking with a colleague transcribing a minute book with pieces to your puzzle has been a satisfying part of this work for me.

Here are some other great examples of these “Eastern State puzzles.”

In 1854, the Board discussed the possibility of purchasing a fire engine and hose carriage. They formed a special committee to research the operation of a fire engine and contact sellers. The committee considered what was necessary to keep the fire engine continuously ready for use, and how long it would take to move the engine to the water basin if a fire occurred. But why was this investment of time and resources so important? The reason only became clear to me when a colleague mentioned that, in transcribing other records, they’d learned that a fire had occurred at the penitentiary the previous year. 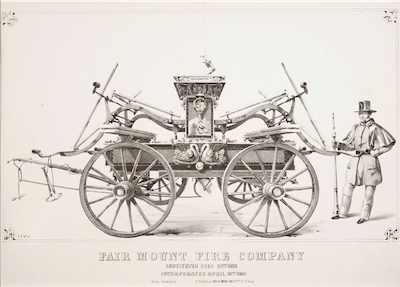 Sometimes, events uncovered in the Board of Inspectors minutes require further research in Eastern State’s other records for clarification. For example, the March 12, 1842 minutes of the Board mention, “The Wardens Account for retaking prisoner No. 1170 was presented and laid on the table.” There is no other information in the minutes on how this particular person escaped or was captured.

To piece together the full story, we must also reference the warden’s daily journal. In his journal entry from March 1842, Warden George Thompson discusses the recapture of No. 1170 (Joseph Cellyers) mentioned in passing in the minutes referenced above. The details he provides indicate that after Cellyer’s escape, a person arrived at the prison at dusk asking for a $100 reward for the opportunity to capture Cellyers. After some distance, the informant pointed at a light in the second story window of a house and told the Warden that this was where the escapee was staying. Then, the informant ran off. The Warden and Overseer entered the house from the back door, recaptured Cellyers, and took him back into custody.

I’ve worked at Eastern State for almost two years now, and there are still so many “history mysteries” I’ve yet to uncover. As many others are enjoying trying their hand at puzzles at home, my colleagues and I have enjoyed gathering bits of information through transcription and using them to reassemble forgotten stories from Eastern State’s past. We’re all looking forward to sharing more of what we’ve learned with you when our site reopens.