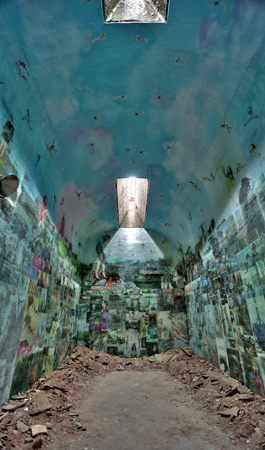 The piece reflects the artist’s personal experience while incarcerated in federal prison, where he created a 39-panel surreal landscape on bed sheets and mailed each piece home. His installation at Eastern State will modify this massive image to cover the interior walls of an abandoned cell.

Meet the Artist
Philadelphia-based artist and returning citizen Jesse Krimes holds a BA in Studio Art from Millersville University. In 2009, he was indicted by the U.S. government on non-violent drug charges, labeled a "drug kingpin," and sentenced to a 70-month prison term. While incarcerated, he produced Apokaluptein:16389067, a vast multi-panel work, established prison art programs, and worked collaboratively with fellow inmates.

Listen to the Audio Tour Stop 1

Listen to the Audio Tour Stop 2

Artist installations are made possible in part by revenue from Eastern State’s Halloween fundraiser, Halloween Nights.